Hello and welcome to my page, I am a Visual Artist

Turning 100 In November, Norm Vernon has led an extraordinary artful life. Though his first and only art education was a course in sign painting, taken in the evenings while in high school, Vernon began creating from an early age. Drawing characatures that made students and some good natured teachers laugh in school, as well as lightening the mood at the conscientious objectors work camps he served in during the war. When Vernon became a contractor, building throughout Vancouver and the lower mainland he drew his own architectural drawings. Full of ideas, and with a reputation for excellence and hard work he was always in demand. He built homes and additions, as well as did work for Carter GM, and Henry's Electric. He Built Ceremonial Long Houses for First Nations, and worked on camps and homes on several Islands. Retiring as a contractor at age 78, he turned his talents to creating a multitude of furniture, and carved more than 30 boats out of a cedar tree that came down in his backyard. He used his woodworking tools and skills to cut out thousands of stockings that were filled by BC Tel volunteers for charity. When his wife took ill Vernon didn't like to be in the workshop away from her, so he put down his tools and took up painting. Inspired by his love of nature and the outdoors, and his many memories of life in Vancouver and travels around the world, he painted for the most part without direct references, adding to the whimsical nature of his personal style.

Vernon wishes he had had the opportunity to attend art school but looks back fondly on all of his experiences and with gratitude for the wonderful life he has lived. Vernon’s journey shows us how an artful life can be carved, through varied and unexpected circumstances. Creativity flowed through every part of Vernon's life, and his paintings and carvings tell you the stories of his fascinating lifetime. Stories, he will happily tell you, with passion and vivid detail. 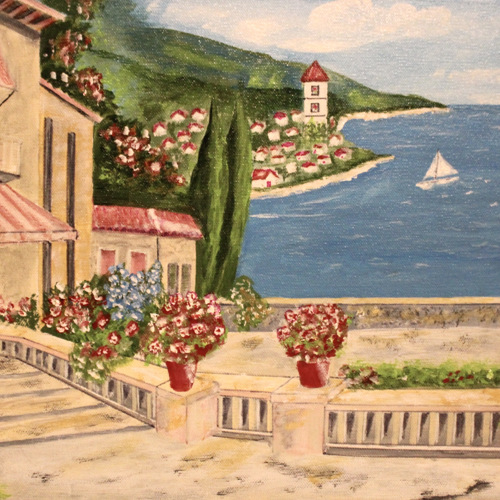 My Grandfather, Moses Perry built boats in Vancouver for people like the BC Sugar Refinery founder, Benjamin Rodgers. One of my favourite memories is going out on one of Grandpa Moses Perry’s newly created boats with my parents and grandparents. Grandpa Moses came to live with us in his later years, and I watched him carve small boats by hand. After I retired from Building homes, I decided to try carving boats like my grandfather. The first two boats were carved out of red cedar from the lumberyard in Steveston. A cedar came down in my back yard and I carved more than 30 boats from that tree. Sometimes I’d be walking at a marina and see a boat I’d like to carve. I would walk out the length and then create it. Some boats were left natural and others have elaborate coats of paint and details. Each one would be taken upstairs and given the float test in my bathtub before completion. Over the years I’ve given away a large amount of furniture, jewellery cases, boats and other sculptures that I’ve created.

I have always enjoyed sketching. In school I would cartoon the teachers and make the students laugh. In conscientious objector camps, I drew caricatures and pictures to keep spirits up. My skills also helped to land me a few sign painting jobs. I did my own architectural drawings as a building contractor. I’d draw pictures for my grandkids that kept them entertained.

When my wife took ill, she needed me close by instead of outside in the wood shop. So I decided to start painting. Teaching myself, I painted on ceramic tiles, wood, paper and canvas. Often I painted portraits of the people and nature I loved, and scenes I remembered from my childhood and travels to Europe. I am so thankful to have had a creative outlet, my artwork has given me a lot of joy. I recommend that everyone find a hobby that they love to pursue in their spare time.